The Spanish outfit won its first UWCL title with a convincing victory. 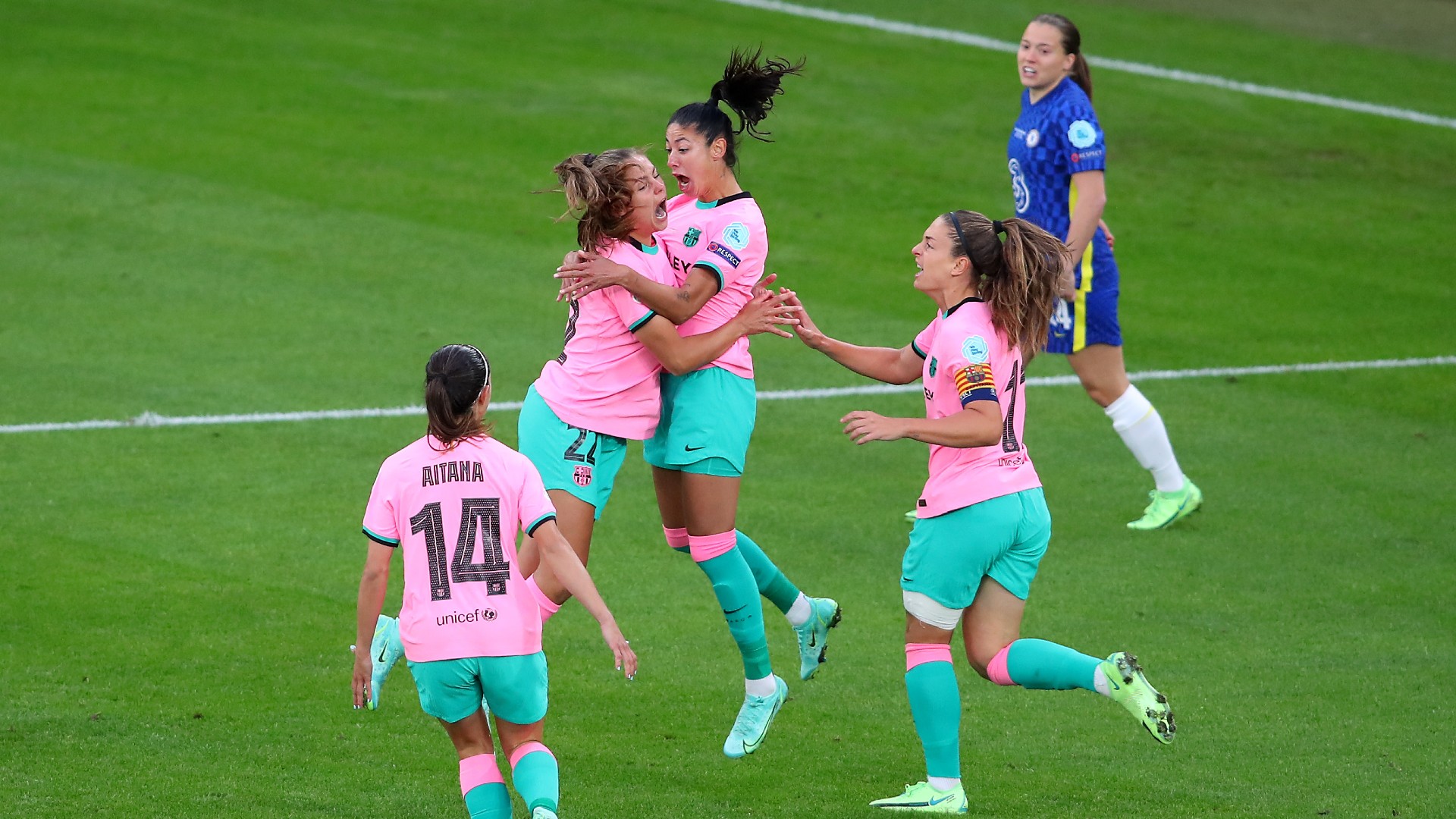 A frantic opening 36 minutes propelled Barcelona to a 4-0 victory over Chelsea on Sunday, giving the Catalans their first-ever UEFA Women’s Champions League title.

Barca struck inside the opening minute, forcing a freak own-goal by Melanie Leupolz just 35 seconds in after hitting the crossbar just seconds prior. The stunning start set the tone for the rest of the first half as Barcelona used a high-energy press and some opportunistic finishing to put the game out of reach well before the halftime break.

Alexia Putellas, Aitana Bonmati, and Caroline Hansen all added to Barca’s tally, giving the Spanish side a four-goal lead at the 36-minute mark. A shellshocked Chelsea managed to get to the half without giving up any more goals, but the damage had long been done by that point.

A much-improved second half by the Londoners did little to close the gap between the teams as Barca was content to sit on the lead and allow Chelsea to come at them. In the end, the giant mountain was just too big to climb for the Blues, giving Barcelona the victory and the title.

🎉 BARCELONA ARE CHAMPIONS OF EUROPE! 🎉#UWCLfinal | 🏆🔵🔴

DAZN provided up-to-the-minute commentary and analysis of Sunday’s match. Here’s how it all went down.

It all went wrong from the opening whistle 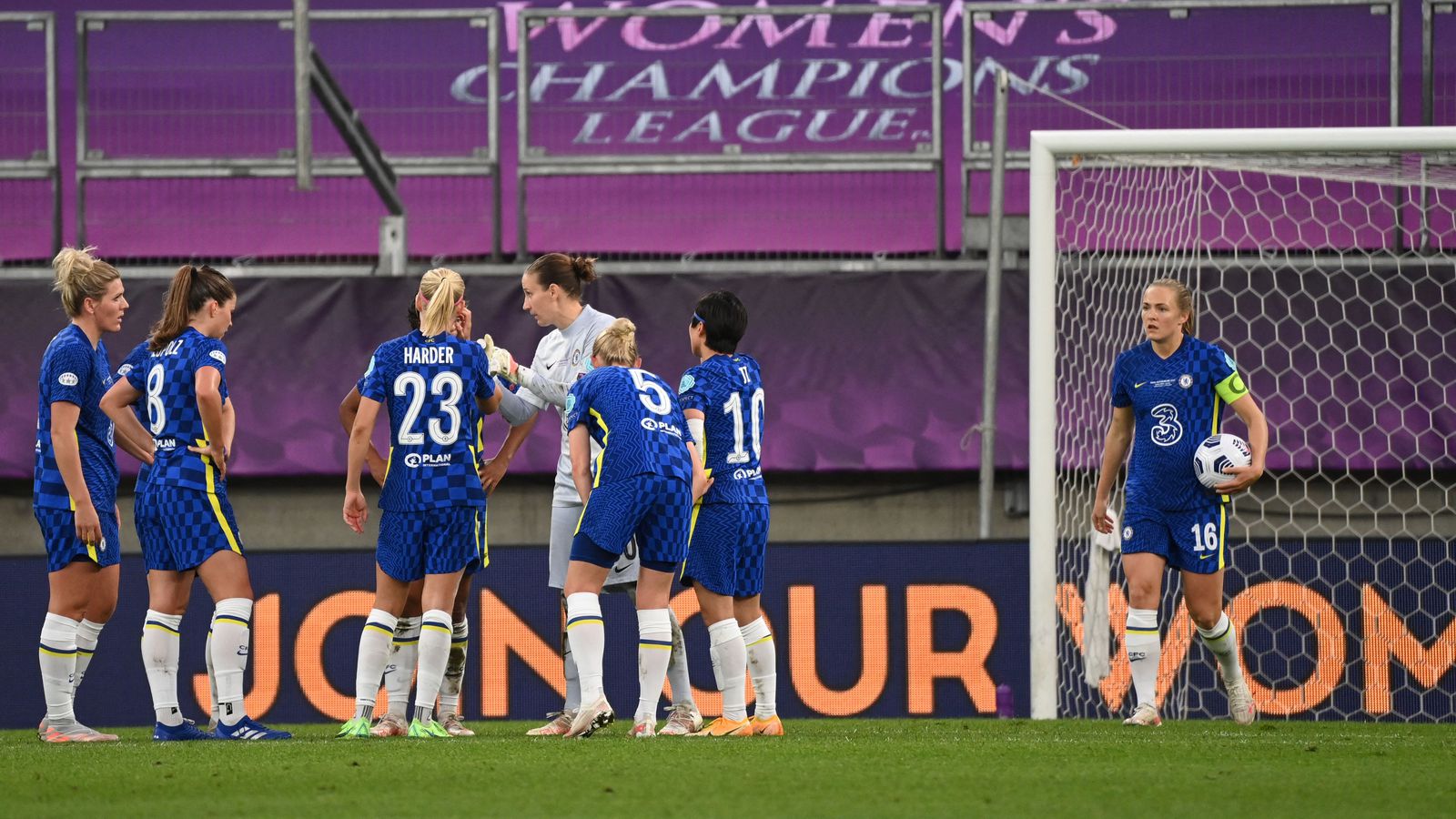 It all went wrong from the opening whistle

En route to the Champions League final, Chelsea FCW hardly put a foot wrong. Unfortunately, the Blues hopes of securing their first UWCL trophy were all but gone within twelve minutes of the opening whistle. The majority of the match was played with the Blues stunned, down multiple goals and watching their European dreams fade to dust. Chelsea found their feet a bit in the second half, but at that point, they were down 4-0 and die had been cast.

Barcelona’s dominance was on display from the opening whistle. Just seconds into the match, Chelsea’s woodwork was rattled by a Barcelona shot from the edge of the box, centimeters from opening the scoring. Unfortunately for Chelsea, the one bit of good fortune they had in the match didn’t even matter. As Chelsea attempted to get the ball out of their box, the intended clearance came of Melanie Leupolz and looped over the outstretched hand of Ann-Katrin Berger to put the Blues behind 1-0. It may have been a bit unlucky for the Blues, but the damage was just beginning.

Ten minutes later, Barcelona caught another break. This time, Jennifer Hermoso was awarded a penalty after she appeared to kick Melanie Leupolz on the followthrough of her shot. VAR has hardly been a friend to Chelsea and today was no different, as the call stood, despite multiple replays seeming to confirm it was Hermoso that kicked Leupolz. Regardless, the penalty was cooly converted and Barcelona were firmly in control 2-0.

Goals three and four weren’t far behind for Barcelona. Aitana Bonmati finished an wonderfully worked team goal for number three, before Lieke Martins casually strolled down Chelsea’s left flank and made the simplest of passes for a tapped in finish. At 4-0, any remaining hope was gone. The Blues had been shellshocked in the same fashion they had done to so many other teams this season.

The second half saw a better performance from Chelsea, but the pattern of play become entirely predictable. With a massive advantage, Barcelona had no incentive to spread themselves thin against a Chelsea team desperate for goals. Chelsea were forced to try and break down a compact Barcelona, who continued to look dangerous when springing counter attacks against Chelsea. The typical electric connection of Harder, Kerr, and Kirby never sprang to life. Each had chances to score a consolation goal for Chelsea, but a goal felt more and more unlikely as the match wore on.

Make no mistake, this is a massively disappointing day for Emma Hayes and Chelsea, but this is not the end of the road. Barcelona were served a similarly lopsided defeat by Olympique Lyonnais in the 2019 UWCL final. That loss has served as a focal point for this Barcelona team as they’ve worked to avenge that 2019 loss. No doubt today will serve as a similar rallying point for Chelsea as they reload for next year’s competition. Chelsea can make UEFA Women’s Champions League history tonight. No English team in the competition’s current guise has ever lifted the trophy. Emma Hayes and her players can change that.

Standing in the Blues way is Barcelona. The Spanish side were beaten finalists in 2019 and will be hoping to go one step further this time around having overcome Paris Saint-Germain in the last four.

Chelsea beat Bayern Munich in the semi-final a fortnight ago, overturning a one-goal deficit from the first leg to win 4-1 at Kingsmeadow. The Blues also overcame German side Wolfsburg, one of the strongest sides in women’s football, in the quarter-finals.

Hayes has been in charge of the Blues for nine years and has helped transform Chelsea into one of European football’s strongest women’s sides.

«We’re there because we work our backsides off to be in this position, and the highs and lows that come with it,» she explained ahead of tonight’s game.

«We’ve just learned along the way what not to do and that’s what learning’s about, what you don’t do. Then when it comes to knowing what you want, I always say it’s not about what you want.

«It’s what you don’t want. I always focus on making sure I don’t have those things and keep shifting towards the place you want to get to, and trust the process.»

Tonight’s final, which is being played in Gothenburg, is free-to-air across BT Sport in the United Kingdom and kicks off at 8pm UK time.

We will, however, have build-up, live coverage of the game and much more throughout the night. Sam Kerr’s dream of sealing her triumphant season for Chelsea with a Women’s Champions League victory has turned into a nightmare as brilliant Barcelona outclassed the English champions 4-0 in the final in Gothenburg.

The Matildas’ captain had harboured high hopes of becoming the first Australian woman to play on the winning side in Europe’s biggest club match in the Swedish showpiece on Sunday (local time).

But her hopes were dashed after a horror first-half saw the Women’s Super League holders ship four goals, including a freak own-goal from Melanie Leupolz that set Barca on their way after just 33 seconds.

Kerr was finally put out of her misery in the 73rd minute; England’s Golden Boot winner taken off by coach Emma Hayes with Chelsea making absolutely no headway.

Playing some sumptuous passing football, Alexia Putellas, who converted a softly-awarded penalty, Aitana Bonmati and Caroline Graham Hansen all scored for the Spanish champions in the opening 35 minutes to dismantle a side which had lost only one of its previous 17 games.

Kerr, hoping to go one better than Matildas teammate Ellie Carpenter, who was an unused sub in Lyon’s triumph last year, barely got a look-in at the Ullevi Stadium as Barcelona ran rings around the London side in the opening period.

Kerr, who the previous week had won the Golden Boot award as the WSL’s top scorer while the Blues sealed the league title, blazed her only first-half effort, a left-foot volley, high and wide.

After the break with Barcelona content to sit on their lead, Chelsea’s best chances again fell to Dane Pernille Harder, who had also been wasteful with Chelsea’s two best chances in the first half.

Kerr kept battling, but couldn’t quite latch on to Guro Reiten’s 50th minute cross and then, disappointingly, she looped a header well over in the 70th.

It was to be her last contribution as, three minutes later, Kerr’s big night was over as she trooped off the pitch, looking dispirited as her side went on to suffer the biggest-ever defeat in a one-off WCL final.