A thrilling game at the Estadio Metropolitano saw Colombia come back from a two-goal halftime deficit to draw 2-2 with Argentina in a FIFA World Cup Qualifier. 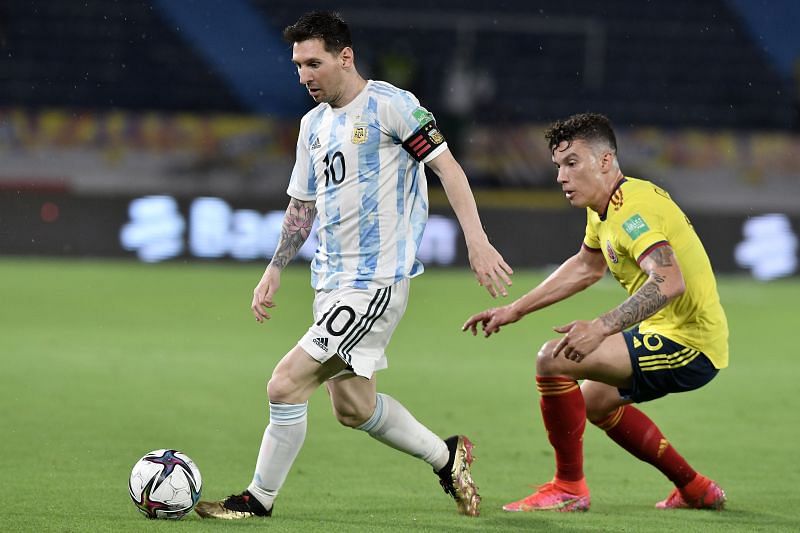 A thrilling game at the Estadio Metropolitano saw Colombia come back from a two-goal halftime deficit to draw 2-2 with Argentina in a FIFA World Cup Qualifier.

The hosts came into the game in buoyant mood, having comfortably dispatched Peru 3-0 away from home last week.

However, they got off to the worst possible start when Argentina went ahead in only the third minute. Rodrigo De Paul’s perfectly weighted free-kick was headed home by Christian Romero to break the deadlock. It was the Atalanta defender’s first international goal in what was only his second appearance for his country.

The visitors doubled their lead just five minutes later when Leandro Paredes finished from close range after being played in by Nicolas Gonzalez.

Argentina continued to dominate the rest of the first half and went very close to getting a third through Gonzalez, Lautaro Martinez and Lionel Messi.

There was a long delay needed to treat Emiliano Martinez after the Argentina goalkeeper collided with Yerry Mina. The Aston Villa man was deemed unable to continue, and his place was taken by Agustin Marchesin.

The second half started with referee Roberto Vargas pointing to the spot to award a penalty for Colombia. He adjudged Nicolas Otamendi to have committed a foul in the area.

Despite heavy protests, the decision stood, and Luis Muriel stepped up to convert by sending Marchesin the wrong way.

Argentina took a while to get going after the break. They fashioned their first chance of the second half when Lionel Messi’s free-kick from the edge of the area forced David Ospina to make an uncomfortable save.

The hosts grew into the ascendancy in the final 25 minutes and pushed Argentina back into their half. This left them susceptible to being caught on the counter.

This proved to be the case when Lautaro Martinez and Lionel Messi got excellent chances to score a third goal for the visitors. David Ospina was, however, on hand to deny them with two excellent saves.

Those saves proved to be invaluable as Miguel Borja rose highest to head home a cross by the lively Juan Cuadrado in the fourth minute of injury time.

On the overall balance of play, a draw was probably the right result as both sides dominated each half almost equally.

The draw means that Argentina are still second in the table despite consecutive stalemates, although they could rue a missed opportunity to steer further clear of the chasing pack.

The former Arsenal man was relatively untested for most of the first half until the nasty collision that saw his day end early.

The Sevilla man was a constant threat down Argentina’s left flank and helped launch several of the visitors’ attacks. He, however, struggled to deal with the energetic runs of Juan Cuadrado.

The 23-year-old almost put no foot wrong in what was a performance that belied his inexperience on the international stage. He received a yellow card in the first half before being replaced midway through the second half.

With the exception of his penalty concession, Otamendi had a fine display at the heart of the Argentina defense. He was willing to put his body on the line to protect his goal.

Gonzalo Montiel provided width in attack and combined well with Messi on occasion. His reduced concentration in the second half saw Colombia take full advantage.

The Tottenham Hotspur man was full of energetic running, although he did not do too much for Argentina in attack before his substitution.

The 26-year-old scored Argentina’s second goal. He also excelled in his defensive duties. His influence waned in the second half as the hosts dominated proceedings.

Rodrigo De Paul provided the assist for the opening goal and proved to be a handful for the Colombian players throughout the game. His technique and hold-up play helped Argentina win crucial free-kicks while they were trying to protect their lead.

The VFB Stuttgart man had a fine performance and ended his night with an assist. He was substituted in the 64th minute.

Lautaro Martinez was largely on the periphery for most of the game. He got a golden opportunity in the second half that he really should have buried.

Colombia’s organized defending, particularly in the second half, limited open spaces for Messi. The Argentina captain, however, still managed to weave his magic, particularly from set pieces. He forced Ospina into a smart point-blank save that might have gone in on another day.

The Porto goalkeeper came on with an hour to go but did not take the opportunity to showcase what he is capable of. Despite making some routine saves, Marchesin should have done better to prevent the injury-time equalizer.

Exequiel Palacios came on for Lo Celso in the 55th minute.

The 23-year-old was brought on to add more verve in the middle of the park, but Colombia seized the initiative shortly after his arrival. He also had a hand in the concession of the second goal.

German Pezzella replaced Romero in the 65th minute and received a booking for a cynical foul soon after. He also made some crucial defensive interventions but was outjumped for the equalizing goal.